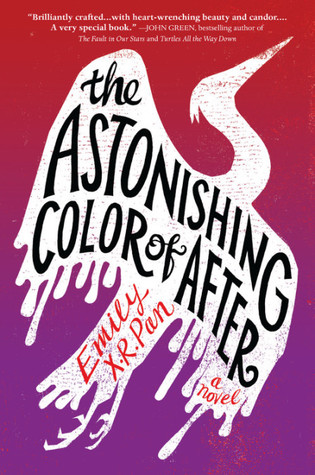 I’d heard a lot of rave reviews of this debut novel, so I was super excited to pick it up. In the beginning of the novel, Leigh’s mother commits suicide, and in the wake of her death, Leigh becomes convinced that her mother has turned into a bird. At the bird’s urging, Leigh travels to Taiwan to meet the grandparents she’s never known. While there, she learns more about her family history, while also grappling with her grief, her feelings for her best friend Axel, and her relationship with her father.

There was a lot of beauty and depth and complexity in this one. I can absolutely see why so many people have been raving about it. The way that Pan weaves grief with magic is really beautiful and felt very authentic–it felt like the only way to tell this story, and that’s something I always love in a book. I also loved that the book asked so many questions that didn’t get answered. There were a lot of messy layers to Leigh’s emotions and relationships. Nothing about Leigh’s experiences and emotions is ever easy or simple. I loved that Pan didn’t try to tie everything up neatly, which, of course, is pretty much impossible when it comes to the things this book deals with: suicide and grief.

I also loved Pan’s use of art and music and color in the novel. This felt very specific to Leigh’s character, and so it was a really interesting and inventive way to get to know her and to experience her emotions as a reader.

But despite all the things I loved about it, this book did not blow me away the way I was expected it to. It’s on the long side, and I think perhaps part of why I didn’t absolutely love it has to do with how it was structured. The bulk of the book is made up of memory and flashback. Leigh goes to Taiwan to visit her grandparents, and while there, has a lot of flashbacks. She also learns a lot about her family’s past, by experiencing the memories of her parents and grandparents. All of this happens through various magical means. The story is very quiet, which I appreciated, as it’s about a teenage girl dealing with grief, but there was also something about the way Leigh discovered everything that felt a little too easy, a little too pat.

I thought the magical elements were a really beautiful way to explore grief. I loved that Leigh saw her mother as a bird, and how her experience of that became central to how she moved through the world. I loved that the magical elements were never explained. Pan left it up to the reader to determine what was real and what wasn’t. I loved all the interesting ways that magic distorted Leigh’s reality and set her apart from the people she loved. It felt very authentic to the ways that people experience grief, and for me, it added a layer of complexity to the story.

But despite all the lush emotional richness that they added to the story, the magical elements, for me, didn’t work as a plot device. I found myself bored by the structure of the novel. A lot of what happened felt like the same thing happening over and over again, with slight variations. Leigh’s emotional life was very rich, but sometimes what was happening on the page felt thin. I found myself most engaged by the flashback chapters, and I think this is because they were scenes: scenes of Leigh with her mom, her best friends, her family. Much of what happened in the present of the book was Leigh alone, reliving other people’s memories, or thinking and feeling, but not interacting with people.

This isn’t a criticism, exactly. There were so many wonderful things about this book, and I’d definitely recommend it. But for me, it was one of those books with a lot of beautiful and interesting elements that didn’t quite come together as a whole. I enjoyed it, but it didn’t feel as weighty as I’d hoped it would be.

3 thoughts on “The Astonishing Color of After by Emily X.R. Pan”