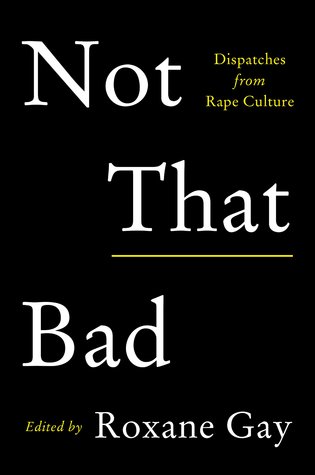 This is a brutal, visceral, powerful collection of essays about rape culture. It was hard to read–not only because of the subject matter–but because of the way it lays bare how prevalent rape, sexual assault, and misogyny are in every facet of American (and global) life. The #metoo movement has already made this abundantly clear, but reading this kaleidoscope of essays, most of them written by survivors of rape, sexual assault, and sexual abuse, is a testament to the horrifying ordinary-ness of rape culture

Every essay in this collection was beautifully written– gorgeous prose, soaring sentences, just shimmering. At times it was physically painful to read such beautiful writing about such terrible things. But that’s part of what makes this book so necessary–the raw, honest, hurting, unflinching beauty of these essays. They are about trauma and power and speaking out and being silent, about shame and anger and being seen and connection and loss. Each one was both a gorgeous piece of writing and a singularly important part of this conversation.

One of my favorite essays was “Why I Stopped” by Zoe Medeiros, in which she explains why she is no longer telling the story of her rape. It was a gorgeous and heartbreaking piece of writing. For me, it illuminated something central and important: the need to center the experiences of survivors–whether that means speaking out or shutting up.

There were many essays in this book about the need for women and survivors of rape and sexual assault to tell their stories, about the power of speaking out. There is so much shame and stigma attached to rape, and too many people are silenced and suffer because of it.

Medeiros’s essay doesn’t contract any of that. In the essay, she speaks about how she spent years telling the details of her story, and it did not help her. She then wrote a beautiful and eloquent list of the things that did help her. Her essay wasn’t a call for “not talking about it”. What she articulated so beautifuly and painfully was a deeper truth, one that I don’t think we often talk about: telling a story for the sake of telling a story is not brave and powerful. The power of telling a story lies in what it can do for the teller. It is important to talk about rape, and for women to share their own stories about it, because, for many people, the act of telling is an act of healing. But this is not the case for everybody. Medeiros’ story about choosing not to tell her story is as important and necessary as another woman’s story about the sexual violence perpetrated against her.

This is a hard book to read, and it left me feeling sick at the sheer enormity of the atrocities that humans commit. I’m not at all sure where we go from here, but I do know that anyone who can needs to read this book.

One thought on “Not That Bad: Dispatches from Rape Culture edited by Roxane Gay”