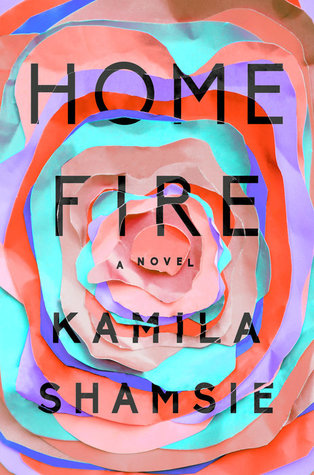 There is so much going on in this novel, and I’ve been putting off reviewing it because while I loved most of it, the ending drove me crazy, and I’ve been struggling with how to write about it.

Simply put, this is a book about two British Muslim families and the various ways their lives intersect over the course of a year or so. There’s Isma, a young woman who’s been taking care of her younger twin siblings since their mother died years before. Then there’s a prominent British political figure and his son, also of Pakistani descent. The book is told from the POVs of these five different people, as their lives intertwine and become inexorably linked.

These five POVs are what made this novel shimmer and stand out. Each character was so complex and so layered. Though they all shared a common religion (to varying degrees of practice and self-identifcaiton), each character had a vastly different relationship with Islam and with their own identity as Muslim and British. This shouldn’t be all that surprising or interesting; it should be fairly obvious that every human has a completely different relationship with their culture and background. But we live in a world that likes to lump people together, and especially likes to lump all Muslims into one category. This, of course, is racist and dangerous. So the strength of Shamsie’s characterization also becomes a sharp social commentary.

Though the book starts off slowly, it’s nearly as plot-driven as it is character driven. Every character had complicated reasons for doing what they did. Every action–whether stupid, courageous, frustrating, selfless, selfish, or compassionate–felt completely believable. I never wondered about any of their motivations, even when they made troubling choices. This didn’t make the book boring. It made it so very readable. I did not like every character, but I was completely engaged by every character. Even the ones to whom I felt the least connected, I still understood. I could see the world so clearly from their perspective. It takes some doing to pull this off, but Shamsie made it look easy.

This, in my opinion, is one of fiction’s great strengths. In fiction, flawed characters get to be whole. People who we might never get the chance to understand in real life come alive. It is one of the things that makes reading novels such an opening experience. I loved that these five characters were all in conflict with each other, with themsleves, sometimes with their country. They all reacted differently to the same events. It made for a lush, intimate novel about Muslim identity, British identity, the boundaries between home and not-home, sibling relationships, and the trauma and violence caused by racism, Islamophobia and fundamentalism.

Then there was the ending. Home Fire is one of those books that ends abruptly. There’s a dramatic climax and the book ends right there, without any reflection or wind down. Perhaps this works for some, but it rarely (if ever) works for me. I felt like I had been tricked or cheated, robbed of the time I needed to sit with the characters and decompress after the climax, during which I was practically holding my breath.

After finishing it, I remembered that it was a retelling/reinvention of Antigone, which I haven’t read since high school. Once I reminded myself of the plot, some of Shamsie’s choices made a bit more sense. They still didn’t work for me. The ending felt forced and jolted me suddenly out of the story, whereas the book up until that point had felt organic and wholly its own. In this case, I felt that the retelling did not serve the story. The whole novel was so thoughtful, so intricately layered. The ending felt simple.

I still absolutely recommend this book. I suspect the ending won’t irk others they way it irked me. But if, like me, you like a novel with a bit of breathing space at the end, prepare yourself.

The audiobook was decent, but it didn’t really add anything, which is what I’ve come to expect from audiobooks. The same narrator did the whole book, and there was almost no differentiation between chracter voices. The narration itself was good, and the writing was good enough that I mostly didn’t care. But there were some moments in the dialogue when I lost track of who was talking because I couldn’t tell the character voices apart. The multiple points of view are so central to this novel, and they could have executed brilliantly on audio, but weren’t. I’d read it in print instead.