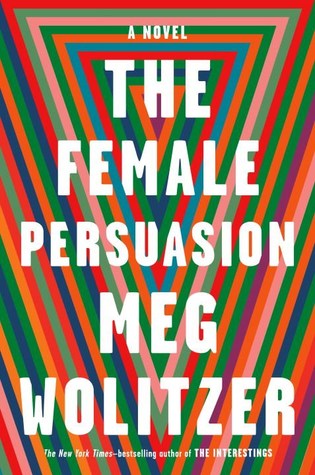 This book has gotten so much buzz, touted all over the internet as an important feminist novel for the 21st century. (Well, I don’t actually know if anyone said that. I just know that people talk about it as a relevant, contemporary feminist novel.)

At its most basic, it follows three young people through college and after–Greer, her boyfriend Cory, and her best friend Zee (who gets very little screen time). Greer’s life is forever changed when she gets a job right out of college, with Faith Frank, (second wave) feminist icon, and Greer’s idol, at Frank’s new  foundation.

To me, this novel felt like an empty shell. It was as if Wolitzer decided she wanted to write a book about feminism (mostly white, second wave-inspired, often only-for-show feminism), and then dreamt up some characters to prop up the idea. The characters–their desires, their motivations, their specific loves and fears and hopes and challenges–felt almost secondary, as if they weren’t really the engine driving the story.

Some have criticized the book for being mostly about privileged college grads, and how they fit into a feminist movement. I didn’t have a problem with the privilege itself (and, in fact, both Greer and Cory, though white, come from working class and immigrant backgrounds). But the characters, especially Greer, were just boring. Greer did not feel compelling to me. I kept waiting for something real to happen in her life, for her to struggle, to tumble, to break, to exhibit any emotion other than reverence for Faith Frank and concern about her career–but it never happened. Likewise, Faith Frank. She gets some long POV sections, but I just couldn’t bring myself to care about her even a little bit.

The most interesting character by far was the only main male character, Cory, whose life was profoudly different form Faith’s and from Greer’s, who had to deal with real trauma, whose life took surprising and unexpected turns. Cory changes drastically over the course of the novel, and the person he becomes is not who he thought he would be. In his POV sections there was movement, growth, and turbulence. He was the only character I found myself engaging with in any serious way.

It’s a bit odd, in a book that’s supposed to be all about women, that the most interesting, complicated, and authentic character is a man. I think that’s part of why this book didn’t work for me. In her attempt to write a book about lofty ideas and feminist movements, Wolitzer looses sight of the thing that drives fiction: people. Their ticking hearts, their messes, their weird and confusing inner lives. Cory was interesting because specific things happened to him that affected him in specific ways. Greer’s life was unspecific: go to college, stumble into a job with your dream mentor, be successful. Her whole character, like the book itself, felt like performance.

The ending was especially drab, because, after a whole book about Faith Frank (who I really couldn’t stand), someone who embodies second wave feminism, Greer, the heroine, seems to simply take up her mantle. Though the book half-heartedly criticizes performance feminism (both Faith and Greer get frustrated with the fancy, corporate direction the foundation takes), it’s hard to take that criticism seriously. In the end, Greer goes on to become famous for her own brand of performance feminism. The book seems to imply that she’s the next Faith Frank.

I’ve read a lot of reviews that mention that this book offers nothing new or original, and I agree. That’s not exactly the problem I had with it, though. I don’t think a book needs to be new in order to be good. I don’t even think that the brand of white, middle-class feminism Wolitzer writes about is undeserving of being explored in a novel. I don’t think there’s much in this world that isn’t worth being explored in a novel. My problem was that this novel lacked movement and dynamism. Every storyline, other than Cory’s, felt static. It felt more like a history of second wave feminism, with a nod to some of the more radical and contemporary feminist movements going on today, than a novel.

I love books with big themes, books that explore complicated ideas, books that strive to say something about the world that’s bigger than the lives of their characters. But in a novel, the characters do the talking. They don’t need to be likable, but if they’re not interesting, if they don’t feel real and specific and true–the ideas aren’t going to stay with me.

The writing was beautiful, and this book was oddly readable (I read it in three days). But overall, it just felt tiresome.

One thought on “The Female Persuasion by Meg Wolitzer”