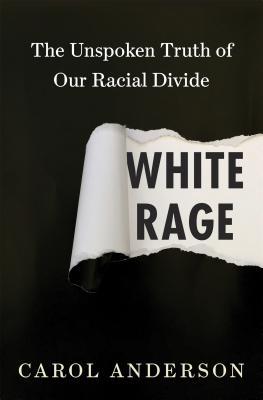 In White Rage, Carol Anderson expertly and clearly lays out the history of America from the Civil War through the present. She examines how, after each important victory of black progress, white supremacy (as wielded by white people in power) has responded in the same chilling way: by blocking that progress by every means possible–legally, socially, politically, and, far too often, violently.

It’s a short, articulate, and thoroughly researched book. The text is only 160 pages, followed by 60 pages of notes. It’s great strength, in my opinion, is just how little commentary there is. Anderson lays out her thesis in the introduction, and she returns to in the epilogue. She occasionally offers her own analysis and interpretation of various historical events, placing them in the lineage of white rage, and showing how white rage has reared its ugly head time and time again. Explaining this phenomenon in the prologue, she writes:

“With so much attention focused on the flames, everyone had ignored the logs, the kindling. In some ways, it is easy to see why. White rage is not about visible violence, but rather it works its way through the courts, the legislatures, and a range of government bureaucracies. it wreaks havoc subtly, almost imperceptibly. Too imperceptibly, certainly, for a nation constantly drawn to the spectacular–to what it can see. It’s not the Klan. White rage doesn’t have to wear sheets, burn crosses, or take to the streets. Working the halls of power, it can achieve its ends far more effectively, far more destructively.

The trigger for white rage, inevitably, is black advancement. It is not the mere presence of black people that is the problem; rather, it is blackness with ambition, with drive, with purpose, with aspirations, and with demands for full and equal citizenship. It is blackness that refuses to accept subjugation, to give up. A formidable array of policy assaults and legal contortions has consistently punished black resilience, black resolve.”

For the most part, however, the facts stand on their own. Anderson merely reports them. Every tenth sentence or so is followed by a citation. This makes the book incredibly powerful; Anderson’s reportage allows for no argument. In five short chapters, she outlines five major victories for black advancement and civil rights, followed by how those victories were systemically destroyed.

After the Civil War, Confederate leaders were not arrested and tried for treason. They were given full power over their Southern states, with the full support of the president and the North. This lead to the Black Codes, a series of laws severely restricting the rights of black southerns, convict leasing, essentially slavery by another name, and a swift evisceration of the Thirteenth, Fourteenth and Fifteenth amendments.

During the Great Migration, rather than implementing laws to support and protect the wave of black workers that poured into their cities, white northern leaders used housing discrimination to create urban slums, enacting segregation that remains in effect, with devastating consequences, to this day. After the Supreme Court’s landmark Brown v. Board of Education decision came decades of obstructionism. School districts simply refused to comply, shutting down schools and using public money to fund private (white) schools, leaving millions of black children without access to education.

In response to the sweeping victories of the Civil Rights Movement, the Nixon and Reagan administrations quickly started the War on Drugs, ushering in our current age of mass incarceration. And, in the wake of Obama’s historic rise to the Presidency, both the man and the office were routinely and publicly disrespected, and voting rights were swiftly and shockingly gutted.

Though the book was published before the 2016 election, we all know what happened next. We are living the consequences, not only of the most recent rollback of voting rights for black and Latino Americans, but of the the last 150 years of America’s racist history.

Obviously I’ve simplified the facts above, but in many ways, it’s the bareness of them that is so chilling. The pattern has been the same since the day the Civil War was won, and before. We have yet to break out of this cycle of violence, oppression, and white supremacy disguised as “respectability”. Anderson’s book is a must-read for all Americans, and I’d especially recommend it for anyone who believes we’re living in a post-racial society, or who hasn’t yet come to terms with how insidious and deeply seeded white supremacy truly is in American culture.

In her discussion of the Nixon and Reagan years, Anderson eloquently explains the danger of this shift in thinking about what constitutes racism:

“The second key maneuver, which flowed naturally from the first, was to redefine racism itself. Confronted with civil rights headlines depicting unflattering portrayals of KKK rallies and jackbooted sheriffs, white authority transformed those damning images of white supremacy into the sole definition of racism. This simple but wickedly brilliant conceptual and linguist shift served multiple purposes. First and foremost, it was conscience soothing. The whittling down of racism to sheet-wearing goons allowed a cloud of racial innocence to cover many whites who, although “resentful of black progress” and determined to ensure that racial inequality remained untouched, could see and project themselves as the “kind of upstanding white citizen[s]” who were “positively outraged at the tactics of the Ku Klux Klan.” The focus on the Klan also helped to designate racism as an individual aberration rather than something systemic, institutional, and pervasive. Moreover, isolating racism to only its most virulent and visible form allowed respectable politcians and judges to push for polices that ostensibly met the standers of American’s new civil rights norms while at the same time crafting the implementation of polices to undermine and destabilize these norms, all too often leaving black communities ravaged.”

Anderson is a Ph.D. and though the book is academic, it is never dry. Though brutal and harrowing, it’s compulsively readable, straightforward, and undeniable. There is absolutely a place for personal and emotional books about the history of race and racism in America, and I’ve found many of those books to be equally stunning and compelling. But White Rage excels in a different way, in its even-handenedness. Anderson adds no commentary. The sheer weight and horror, and the blatantly obvious hate and racism imbued in the acts of history she writes about speak for themselves.

These 164 pages are worth your time, and then some.