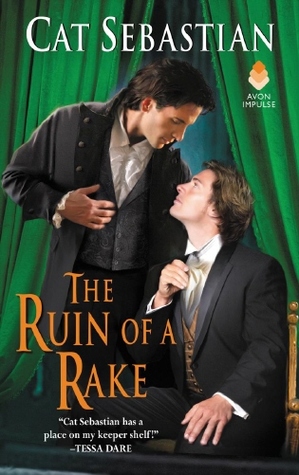 The Ruin of A Rake is the third installment in Cat Sebastian’s Turner Series, a trilogy of queer Regency romances. This one is about Julian Medlock, a man who has spent years cultivating his reputation as a Very Proper Gentleman and Lord Courtenay, who has spent years cavorting around the Continent without a care for ruin or reputation. They are thrown together by Julian’s sister, sparks fly, and sparks become full-blown flames as they realize there’s a lot more to each of them than meets the eye.

I should say first that I love queer historical romance. I think it’s because there’s something so deeply satisfying about seeing queer people find their happy endings at a time and place when being queer was not only despised, but illegal. It is still dangerous to be queer today, in my own country and all over the world. But even though we still have a long way to go, and much of queer literature is still about suffering, there are more and more queer stories published every year that celebrate contemporary queerness. There are more and more #ownvoices novels being published, from all over the world, that deal with queer themes in new, invigorating, and non-depressing ways.

But it is so rare to see queer happiness in historical fiction. What’s more, queer people have been around forever. While I’m sure many generations of queer folks lived in fear and secrecy, some of them, surely, also found love and companionship and connection. It is such a balm to read those stories. I cannot get enough.

The Ruin of The Rake is a delightful romp. It has all the elements that make for a thoroughly enjoyable story: interesting characters, just the right amount of angst, a lovely-but-not-overbearing opposites-attract trope, a slow (but not too slow) build, perfect pacing, a great balance of tension and tenderness.

It was a joy to watch Julian and Courtenay have to continually reevaluate their opinions of each other. Both of these men keep most of who they are hidden from the rest of the world, and so their mutual discovery of each other was an interesting emotional journey, both for the characters and the readers.

I also really appreciate Cat Sebastian’s secondary characters, and the different kinds of diversity she incorporates into her work. In this one, Julian has a chronic illness, and his sister, a secondary character, is a scientist and married to an Indian man. It’s a historical m/m romance set it Regency London, and white men dominate, but Sebastian does a nice job painting a fuller picture of society than just gentry v. peasant. In both The Ruin of A Rake and the first book in the Turner trilogy, The Soldier’s Scoundrel, there are women characters with agency, which is so refreshing to read in historical romances focused on men. There’s a wide range of people represented, and it makes her books a joy to read.

One thought on “The Ruin of a Rake by Cat Sebastian”