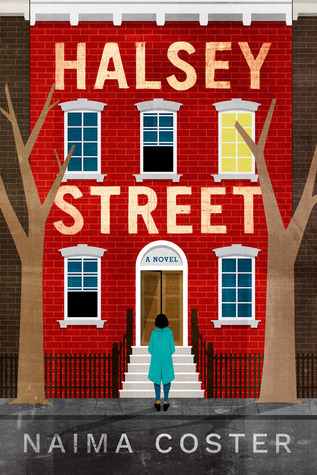 Though, in general, I find star ratings to be imprecise, inaccurate, and only vaguely useful, Halsey Street, for me, is the definition of a three star novel. There was nothing wrong with it. For the most part, I enjoyed reading it. The characters were interesting, the writing was good, and it had some emotional depth–it was bigger than just the story it told. There were no major flaws that irked me to the point that I wanted to stop reading. But it didn’t speak to me. I didn’t feel it in my heart. I finished it; I enjoyed it; I appreciated it. But I did not wolf it down.

In Halsey Street, Penelope, a bartender/artist in her late twenties, returns home to Brooklyn to care for her aging father. Since leaving home five years ago, she’s cut herself off from both her beloved father and her estranged mother, now living in the Dominican Republic. Upon returning, Penelope is forced to confront much that has gone unsaid in her family for years. Coster also explores the ways gentrification affects families, as Penelope watches the neighborhood of her childhood—mostly black and immigrant—give way to wealthy white families and young hipsters.

For me, the strength of the novel was in Penelope’s character. I’ve always hated the “unlikeable character” designation—as if characters exist on a likable/unlikeable binary. Characters, like people, are infinitely complex, and for me, a character’s success has to do with how well I understand them, even in the midst of their mistakes and imperfections.

Penelope is stubborn, hurting, and angry. She hurts the people in her life; she is also hurt by them. She’s a mess, at times self-destructive, and often painfully self-abosorbed. It all felt authentic and real and completely believable. Coster’s prose is clipped and understated, and this emphasized Penelope’s emotional distance from the people in her life. I didn’t dislike Penelope. I felt for her and I understood where she was coming from–and that’s thanks to the strength of the writing. Coster is a master of subtext in this novel.

The narrative switches back and forth between Penelope’s POV and that of her mother, Mirella. I found Mirella’s sections less compelling, perhaps because she seemed a bit more straightforward–a woman who immigrated to the US at a young age, fell into a marriage, and felt trapped by her life. There was less nuance to her character than to Penelope’s.

Perhaps the reason this book didn’t grab me fully was because the central conflict between Penelope and Mirella felt a bit vague. There was a huge well of hurt, betrayal, mistrust, and anger between them, but the roots of it were hazy.

So much of this book is about the consequences of holding on to what has hurt us, and what happens when the pain of the past becomes so much a part of us that we don’t know how to live without it. Mirella and Penelope are both shaped, in large part, by each other–their different choices, both past and present. Through these two women, Coster explores themes of familial and cross-cultural identities.

Halsey Street is a quiet, complicated book. It didn’t pull me in and hold me, but it was still worth the read. The prose worked on many levels, and the chracters all felt fully human, flawed and relatable. I’ll definitely be looking out for more work from Coster.

One thought on “Halsey Street by Naima Coster”