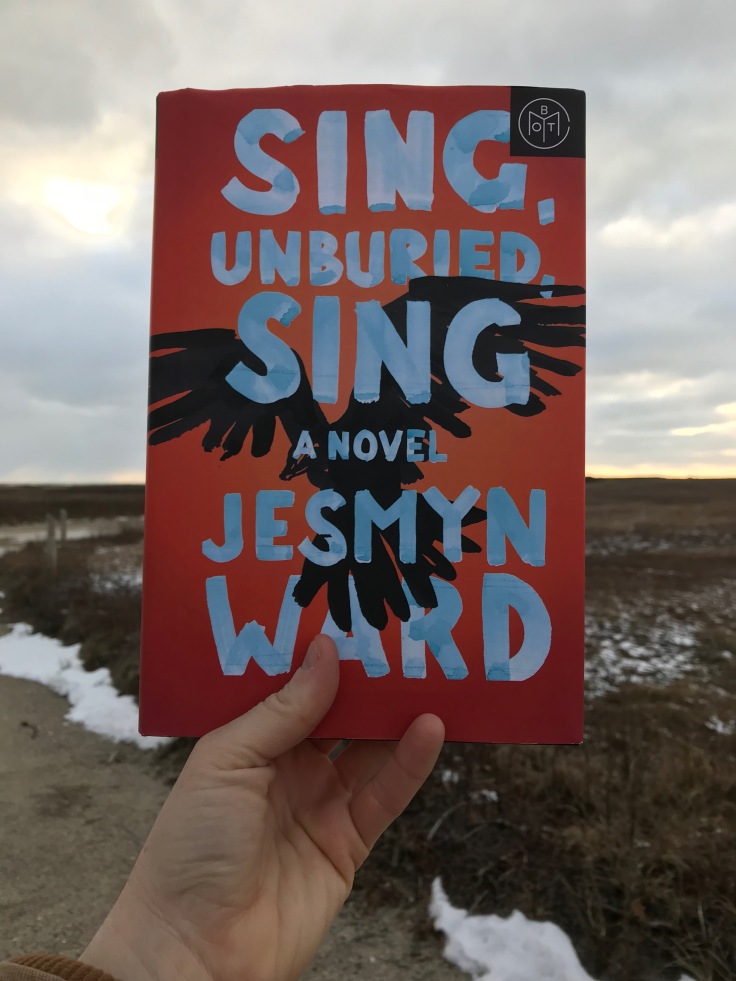 This book was beautiful and haunting from page one. I was completely drawn in by the writing, which was lush and intimate, at times dreamlike, and which grew and blossomed as the story unfurled. The whole book was internal and visceral. When I finished it, it felt like coming out of a deep well. I am still thinking about all its pieces and how Ward brilliantly wove them together into a story that felt both timeless and deeply embedded in our specific time. I’m not sure I can adequately write about it until I’ve read it again, but I’m going to give it a try.

The two primary narrators are Leonie, a young mother struggling with drug addiction and unable to be present for her children, and Jojo, her thirteen year old son. They live with Leonie’s parents, Mam and Pop, who care for Jojo and his younger sister, Kayla. When Leonie’s white boyfriend (and Jojo and Kayla’s father) is released from prison, she takes her children on a road trip across the state to pick him up. This trip changes the whole family and how they relate to one another.

For these characters, history is not a thing of the past, but lives painfully, vibrantly, incessantly in their daily lives. Jojo and Leonie each carry different weights. They have borne different losses and are haunted by different ghosts. Throughout the course of the book, they’re forced to wrestle with those ghosts–both literally and figuratively–and, ultimately, come to a reckoning with them. This is a book about trauma passed down through generations, about memory stored in the body, about how the violence done to black families reverberates through individual lives for centuries.

I was especially struck by the deep compassion Ward has for her characters. These are not one-sided people but complicated, fallible, messy humans. Jojo is a tender boy who moves through the world quietly observing and absorbing. He’s fiercely protective of his sister, forced to take on the roll of caretaker at a young age. But he is never saintly. He wrestles with himself and his complicated feelings about his family. He has a deep sense of himself, but he also flails.

Leonie is often negligent and violent toward her children. She struggles with addiction; she’s often not present when her kids need her; she’s usually more interested in spending time with her boyfriend then with them. But Ward does not allow Leonie to be defined only by these things. She is not merely “a bad mother”, but a woman hurting, unmoored, haunted by old wounds. Because so much of the book is told from her point of view, we are forced to sink into Leonie’s fears, desires, her mistakes, the bargains she makes with herself. She is a whole human, and though it was painful to read about the fallout of the choices she made, by the end of the book, I found it impossible not to empathize with her.

I think it’s also worth noting how prominent and important the tenderness of the black men in this novel was. Jojo’s grandfather, Pop, is a deeply nurturing man, both physically and emotionally. He holds space for Jojo to be a child, engages with him gently and honestly, and embodies a manhood that is strong, humble, giving, and gentle. The specific love that the black men in this book have for each other was a deep balm, a thread of steadiness and comfort that ran through the whole story.

The magical elements were subtle. At first, the ghost characters felt out of place. They seemed to float apart from the lives of the living characters. For me, it made the book feel somewhat distant, as if I were reading through a dream. I was pulled along, but it wasn’t until the last third of the book that I truly felt the impact of those ghosts. The ending left me breathless. The magic felt incidental until it didn’t, and then, suddenly, it was everything.

I want to write about the ways that Ward used magical elements to illustrate loss and memory and the wounds that people carry and pass on to those they love–but “illustrate” seems too petty of a word. Even “explore” isn’t right. It felt more like being submerged, like feeling a truth sink right into your chest.

I read this book in print, but I’ve heard the audio is fantastic. As I write this, I already know it is a book I’ll want to read again. I can’t wait to see how changes and grows when I listen to it. There is so much story, and so much movement and power underneath the story. Ward has been compared to Morrison, and I can see why–like Morrison’s novels, this book has so many layers. It just keeps on going down. It is a specific story about complicated, nuanced, imperfect people. It is a specifically American story about the legacy of slavery and racial violence. It is a universal story about stories and the ways they inhabit our bodies. Layer after layer, it just keeps going on down.

This is one for the ages.