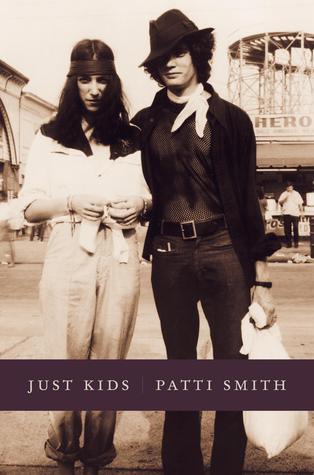 In Just Kids, Patti Smith captures a specific time and place: New York City in the late 1960s and 1970s, at the heart of the growing punk rock scene, and before the onslaught of AIDS. She recounts her own journey from her girlhood in South Jersey to her immersion in the whirling countercultural world of art, music, and poetry. Though her own coming of age, eventful youth, and rise to fame provides a backdrop, Just Kids  is primarily a story about her close relationship with Robert Mapplethorpe.

I’d heard great things about this book, and while I enjoyed it, it left me only partially satisfied. I’ve never been a big fan of memoir, and Just Kids unfortunately falls prey to much of what I dislike about the genre. Much of the book follows a pattern of “we did this, we did that” which I find somewhat tedious. We worked on this art project, we did these drugs, we met these people, we had these jobs, we were at that performance, we lived here, we moved there, we tried this. It was interesting, but mostly because of the people involved, and not because of the story itself.

The book primarily concerns Smith and Robert Mapplethorpe, but many others make appearances: Janis Joplin, Allen Ginsberg, Jimi Hendrix, William Burroughs. While an  intimate window into a world of legends can be fascinating, I found myself disengaging from time to time as Smith meandered through her youthful exploits. I wanted a stronger narrative arc, a central tension running though the whole story, propelling it forward. Though her relationship with Robert Mapplethorpe provides this anchor at times, when she veers away from that and into more general recollections, the book suffers.

In the places where Smith delves into her relationship with Mapplethorpe, the book truly shines. She writes with an unflinching honesty about a relationship for which there is no good name. The two were lovers, roommates, good friends, artistic partners. They shared a deep connection throughout their lives, despite both of them also having many other lovers, friends, and collaborators. That connection comes across with great tenderness, from the day they met as young broke kids to the afternoons they spent together while Mapplethorpe was dying. “He was the artist of my life,” Smith writes, in a beautiful and poignant description of their relationship.

When she is writing about the two of them, their fame and cultural importance falls away, and the story takes precedence: a story about two people who love each other in many different ways, and often in ways that world refuses to understand, accept, or celebrate. For me, that was a story worth telling, and it was interesting and moving and meaningful in and of itself, and not just because of the people involved. I wanted more of that, and less of everything that surrounded it.

That said, I have no particular connection with either Patti Smith or Mapplethorpe. I picked up this book because I’d heard great things about it (especially the audio), not because the subject matter is especially dear to me. If either of these artists have impacted your life, or if you’re interested in the rock and art world of NYC in the 1970s, Just Kids will satisfy. Smith beautifully captures a moment in time, and though that wasn’t enough for me to fall in love with the book, if it’s a moment that means something to you, prepare to be enchanted.

The audio is absolutely stellar. Patti Smith’s narration is familiar and comfortable and completely unpretentious. I would most likely have given up on this book in print, but her narration was so good that I couldn’t stop listening, and I’m so glad I kept going. I wasn’t head-over-heels for this memoir, but it was still absolutely worth it. It’s a beautiful depiction of an unusual friendship and a thoughtful mediation on art, music, poetry, and their role in our lives.

One thought on “Just Kids by Patti Smith”