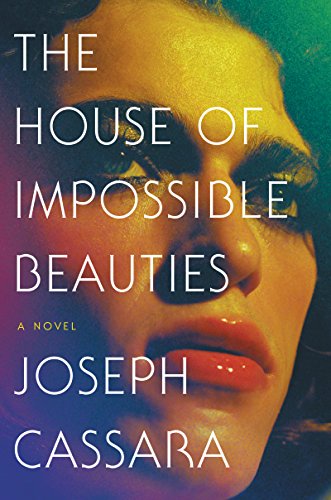 How badly I wanted to love this book. How disappointed I was. I was planning on loving it: a book about queer and trans street kids finding family with each other in the underground ball scene of the 1980s. The novel is based on the real House of Xtravaganza, one of the more famous houses of ballroom culture, founded in 1982 by Hector Xtravaganza. Many of the characters in this novel (including Hector and the house mother, Angel) are based on real people who part of the all-Latino House of Xtravaganza.

Ball culture is an important part of queer history and culture about which I know little. I’ve always found fiction to be a useful and meaningful medium for telling true stories, and so I was excited to pick up this novel in the hopes that it would do justice to the depth, power, creativity, and resilience of the people who’ve been involved in ball culture.

It did not do that. The whole novel felt as if it existed on the surface–a shiny veneer with nothing underneath. Or, rather, underneath was the true story, the real lives of countless trans and queer warriors, mostly poor, mostly people of color, many of them working the streets, many of them homeless. But the truth and depth of those stories did not come across in these pages.

The characters, for me, fell flat. I finished the book with a sense that I never really got to know them. They were not drawn as whole people with deeply unique stories, histories, desires, fears, and joys. Perhaps Cassara would have been better served using entirely fictional characters, rather than trying to base his story on real people. Because the characters felt so far away, the emotional impact of the book was not personal. I did not feel it in my gut.

Reading this novel was brutal–but because of the horrors it describes, not because of any emotional investment, on my part, in the characters. It was imagining the real people who have gone through the traumas Cassara describes that left me feeling empty and angry and sick. For me, this is a mark of an unsuccessful book: I cared deeply about the subject matter, but the fictional narrative as it was presented failed to move me.

Another thing that irked me was the absence of fierce queer love, of safety, of tenderness. There were scenes in which the characters took care of each other, but they were few and far between. The moments of sisterhood and queer family building felt thin compared to the rest of the book, which was primarily moments of violence and terror.

Violence and terror: it was brutal. There was a rape scene, there was sexual assault, and there was abuse. There were many instances of transphobia, femmephobia, and homophobia, much of it violent. Most of the scenes in this book were deeply painful to read.

To his credit, there was some gorgeous writing, and the few scenes in which the four main characters were all together felt true. There was the occasional line that nailed a certain feeling or a certain moment. But those few moments could not carry the book.

I believe that Cassara was trying to write a book that celebrated that community. I believe he was trying to balance the danger and pain of being poor and queer and of color with the vibrancy of music and dance and drag and being true to yourself, of falling in love and finding home and surviving and thriving. But only the terror came through for me.

In my opinion, that’s a slight on the lives of the real people from which he drew inspiration. It’s only telling half the story. It’s important to write and speak and make art about racism and homophobia and transphobia and violence and the ways all these systems of oppression devastate lives. But it’s just as important to recognize how much beauty exists in those lives.

This book comes out on February 6th. I’d skip it.

It did make me want to learn more about the ball scene. I’m on the lookout for some #ownvoices stories, both about the heyday of ball culture in the 1980s and its continuing importance today for queer and trans youth of color.