I love it when I happen to pick up two books in a row that expound on similar themes. This recently happened with two exceptional YA novels: We Are The Ants by Shaun David Hutchinson and The Age of Miracles by Karen Thompson Walker. Two different but equally compelling novels about grief and growing up, both use creative end-of-the world scenarios to deepen and strengthen the stories. Weeks later, I’m still thinking about both of these books; I wish I could read them again for the first time. 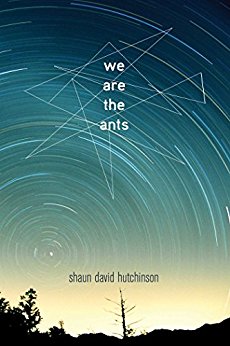 In We Are The Ants, seventeen-year-old Henry has been getting abducted by aliens for years and he’s used to it. But then one day in November they give him an ultimatum: the world is going to end in January, and all he has to do to stop it is push a red button on their ship. It seems like an easy enough decision. But for Henry, who is still grieving his boyfriend’s suicide the previous year, the decision is anything but simple.

We Are The Ants is an utterly beautiful and utterly devastating depiction of grief. Sure, Henry’s been dealing with alien abductions his whole life, and yes, the power to save or destroy the planet lies in his teenage hands. But the book isn’t really about any of that; it’s really about a boy mourning the sudden and terrible loss of somebody he loved.

Henry spends the entire book trying to decide whether or not to push the button. The question haunts him. The depth of his indecision, his fear and anger and apathy and desire surrounding the question of should I or shouldn’t I is palpable on every page. The tension shimmers; there were moments when it was almost painful to read. It seems like too obvious a question to build an entire novel around. Who would choose to let the world end if it were in their power to save it? But Henry’s struggle is not only absolutely believable, it is one of the most haunting and gorgeous stories about grief I have ever read. Grief complicates. Grief makes everything impossible. In the midst of grief, whether or not to save the world is not a question with an obvious answer.

The science fiction in this novel is precisely what makes it so good. Hutchinson gives the power to save the world to a boy whose life has been shattered open. This is what makes the story so interesting and so moving. Hutchinson sets a dramatic stage, with enormous stakes—the end of the world—but Henry’s struggle is an intimate one about surviving grief. We Are The Ants is about the intersection of the enormous and the minute—the future of all life on earth and the pain of one single human boy. Hutchinson writes with humor and depth about matters of scale, illuminating how relevance and importance and size are constantly shifting and endlessly mutable.

The Age of Miracles tells the story of twelve-year old Julia, whose life in a California suburb is changed forever when the earth’s rotation begins, suddenly, to slow. The novel charts a year in Julia’s life, as with disastrous consequences, the days and nights grow longer and longer, and she navigates a treacherous coming-of-age in a rapidly changing world.

I did not expect to be so deeply moved by this story. I listened to the audiobook (which was absolutely stunning) and I actually had to stop what I was doing (I listen to audiobooks while cooking or doing puzzles) and lie down on the couch to listen to the end. The story was so absorbing and heartbreaking that I couldn’t even slice onions by the end of it.

There were moments in the beginning and middle of where I felt the narrative dragging—despite the earth’s slowing rotation and its dire consequences, the story was surprisingly tame. There was no immediate threat, no sense of ultimate and imminent danger; it never felt as if Julia’s life was on the line, although, of course, it was. At points, the story read like a rather boring middle school drama. But I was pulled along nonetheless, and the more I read, the more haunted I became by that simple, ordinary, boring middle school drama.

The world doesn’t always end in a fiery explosion. Sometimes terror is a slow burn, not a loud and sudden crack. It can sometimes take us years to realize that something is deeply, irrevocably wrong. The Age of Miracles was much more powerful and moving precisely because of how slowly it burned. Despite the ending of the world—the seemingly worst thing that any of us can imagine—it was still a middle school drama. The small things in Julia’s life—her first love, the tangling and untangling of her friendships, her changing body, her evolving relationship with her parents—did not lose their import even for something as drastic as the literal slowing of the earth’s rotation. With deft and heartbreaking grace, Walker proves how much the details of our lives—like who to sit next to at lunch or what party you get invited to—continue to matter even in the face of overwhelming catastrophe.

We are the Ants and The Age of Miracles are both imaginative stories that explore two very different versions of possible apocalypse. We are the Ants tackles grief; The Age of Miracles tackles the uproar and turmoil of coming of age. They are both quiet stories that unravel with a beautiful slowness, despite the threat of the end of the world that hangs over both of them. There is an assured magic in the way that Hutchinson and Walker present the lives and choices of their protagonists. After reading both of these books, the thing that I was left with, the knot of truth that each story aroused in me, was that it is not the literal end of the world that matters most to us or has the most profound impact on our lives. It is all the smaller world-endings—the ones that come from heartbreak and violent change and grief— through which we must learn to endure and remain human, despite knowing that those endings will come again and again and again.