This week, I turned to comics for escape. Sometime that’s what reading is about: comfort, escape, the illusion that everything works out in the end and happily-ever-afters exist.

I’m also on a quest to read comics that I can discuss with and pass on to my almost-seven-year-old nephew. He is a voracious reader, and on a family vacation over New Years, I gave him the first volume of Lumberjanes to read. I had just gotten it out from the library and had already finished it. He was looking for something to read, and I thought he’d like it. He has since become obsessed with Lumberjanes, and has read every issue there is. I haven’t caught up with him…I’ve only read the first two volumes!

It is such a joy to watch this small human whom I love devouring and enjoying books with such obvious relish. It makes me love the world a little more. Sharing books with people that we love isn’t going to change the world or solve its problems, but it is one reason to keep getting up every day and doing the work.

A lot of the comics I ended up reading this week have themes that are a little old for him, but reading with my nephew in mind has brought me so much joy this week. I can’t wait to read more comics to share with him!

Top Comics of the Week 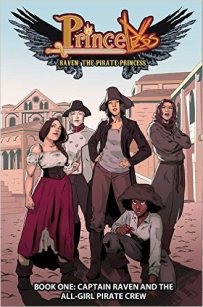 This was, without a doubt, the best comic I read this week. Raven Xingtao is the daughter of the Pirate King. She always knew she’d take over from him one day–it’s a tradition that the women in her family always inherit the crown; her father only had it because his sister had died. But Raven’s brothers convince her father to give the crown to one of them instead of her. Raven refuses to accept this nonsense; she steals a ship and sets off to build a crew of women willing to help her take back what is rightly hers.

Everything about this book is awesome. Raven is a kick-ass queer woman of color; the women she meets to crew her ship all have intriguing stories that I can’t wait to learn more about. It’s adventure packed and full of women rocking it. There’s also so much going on under the surface; like any great story, I could not put it down. The pacing was perfect. There was history between the characters, reveled in bits and pieces, there were complicated motives, there were conflicitng desires. All of these characters felt real and vital; none of their stories were boring or stereotypical. I also loved how the world rode that line between ours and not-ours. There’s Sunshine, who’s half-elf, and there’s also a gaming club full of women playing D&D. It’s the perfect balance between familiar and different.

Also, there’s a scene where a bunch of men who Raven is interviewing for crew positions try to mansplain everything under the sun to her, and it is just utterly, utterly brilliant. 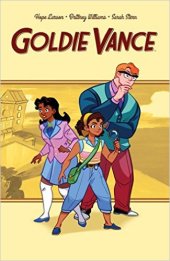 This book was pure delight. Goldie Vance is a teenage girl with a talent for solving crimes. She helps out at the in-house detective service at the Florida Resort her dad manages. This book was fun and upbeat. Goldie’s confidence and humor and forthrightness were a joy to read. There wasn’t anything dark here; just a fun mystery solved by a smart sixteen year old girl and her collection of friends and colleagues. 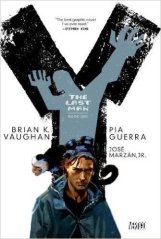 I’m really enjoying this comic, but I don’t outright love it yet. The premise is fascinating, certainly: suddenly, everywhere on earth, every human or animal with a Y chromosome dies, except for Yorrick, a self-involved but good-natured twenty-something, and his pet monkey.

I’ve enjoyed the first two volumes and plan to read the rest. I’m curious to see where the story goes. My biggest problem with it so far is its somewhat essentialist take on gender. Everyone with a Y chromosome dies, and suddenly there are no men left on earth, as if there is no such thing as a man without a Y chromosome (or a woman with a Y chromosome). It’s hard for me to overlook the way the authors’ draw such blatant lines between men and women, as defined by biology. The premise is a great one, and there are so many ways the authors’ could use it to explore gender–how we construct and define it, the ways in which it is and isn’t determined by biology. It’s such a great jumping-off point for turning rigid ideas about gender on their heads.

There are ten volumes of this comic, so maybe it’ll get better–I hope so. Either way I’m going to keep reading. I’m a big proponent of giving myself permission to love things that are imperfect. Good stories are often flawed; it doesn’t make them worthless.

This was a fun and fresh take on the superhero trope–one that I really enjoyed. Six kids get dragged along every year to their parents’ annual planning dinner for an unnamed and semi-mysterious charity event. Bored at this annual event one year, they listen it on their parents, and realize that they are not planning a charity event–they’re supervillains. The kids are shocked, but decide they have an obligation to stop their parents, so they run away, and adventures ensue.

I loved watching this group of kids grow closer and learn to trust each other and work together after realizing who their parents truly were. The combination of normal teenage family drama with the casting of parents as actual villains made for an interesting storyline. All teenagers have to deal with coming to see their parents as people, rebelling against them, learning how to relate to them as adults. The teenagers in this story have to do all of that with the added knowledge that their parents are villains. It raises some interesting questions, like (my favorite!) what does it truly mean to be part of a family, and who gets to decide.

I loved all the teenage characters–they all felt sharply drawn, distinct from each other, true. The dialogue was exceptional. I did not love that many of them discovered they had superhero-esque powers throughout the story. For me, this made things a little too pat: superhero kids vs. villainous parents. I’m still really excited to see where this story goes.

I’ve read the first three issues of this so far, and I’m enjoying it, although I certainly haven’t fallen in love. Faerber describes it as a “Western in space”, which may be why I’m not over-the-moon about it yet: so far there isn’t enough subversion in it to make me really love it. I’m intrigued by the protagonist, a woman who moves with her young son to a n off-the-beaten-track planet, to take a job as the sheriff of a lonely mining outpost on the edge of dessert. I’m curious to know what happens and to see where the story goes. It’s not overtly radical, political, or queer (yet), which, I’m coming to realize, are the things I love most in comics.

I’m keen to read the next installments of Raven the Pirate Princess, Goldie Vance, and Runaways. Goldie Vance is available from the library via Hoopla, but I haven’t been able to find either of the others at the library, in print or digitally. This is a problem I’m running into more and more as I venture further into the world of comics: they cost money. I’m 100% in favor of buying books to support authors and artists whenever possible, but I simply don’t have the budget to buy all the books I want to read. Over 75% of the books I’ve read this year have come from the library. I don’t have any answers to this access-to-comics dilemma, other than that I’ll be reading many series very slowly–and savoring them!–as I can only buy a few new comics each month. 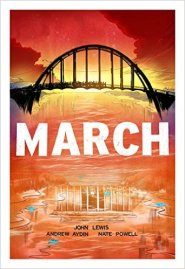 I bought the first book a while back, but I haven’t read it  yet. Sometimes comics make good escapes; sometimes they’re a great format for telling deeply important and relevant stories. I can’t wait to read this book. 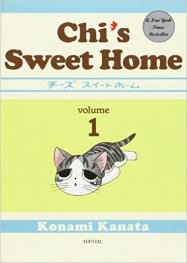 Continuing with my alphabetical reading of books I can get through ComiXology, next up is this all-ages manga about a cat. I don’t think I can explore the world of comics properly without reading some manga. I haven’t done much in the way of seeking our recommendations for manga (don’t know where I heard about this), but I’ve got to start somewhere.